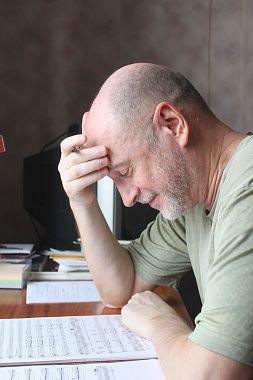 Vladimir Nikolaev (1953) - composer, graduate of the Gnesin Institute and Moscow Tchaikovsky Conservatory. Since 1983, a member of the Union of Composers of Russia. Laureate of the I International Competition named after Witold Lutoslavsky (Warsaw, 1991), 1st Prize winner of the Memorial Fund named after Lili Boulanger (Boston, USA, 1992).

He works in the genres of chamber-symphonic, electro-acoustic music, experimenting in the genre of instrumental theater. The compositions of Vladimir Nikolaev are characterized by careful structure, delicate intonation, and giving significance to noise and speech elements. He also is fluent in non-academic music and folklore techniques.

Composer Vladimir Nikolaev is a master in a wide variety of genres. He feels at ease in traditional academic styles as well as in jazz, rock, folklore, electro-acoustic music. During his creative career, he combines work in serious academic projects and applied music.

His ballet The Gold of the Narts (2003) was perfomed on the New Stage of the Bolshoi Theater. The Zaryadye concert hall hosted the premiere of the opera Worker and Collective Farm Girl (2019). The ballet Gereven (2012) was presented at the Diaghilev Festival by Theodor Currentzis. The composition The Sinewaveland (2011) is a homage to rock guitarist Jimi Hendrix, was written for the Seattle Symphony Orchestra.

The composer created the musical design for many children's and adult, puppet and dramatic theatrical performances. He created music for television series, documentaries and animated movies. The composer wrote many pieces for children, including the television series «Sesame Street».